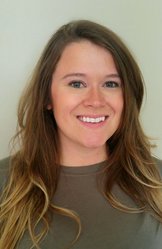 Britany began her acting career in eighth grade with the role of Marian in The Music Man. In the many years since then she has been able to continue developing her skills. She attended the University of Kentucky where she earned her Bachelor’s of Arts in Theatre with a minor in Psychology. Her focus was on character development working mostly with the Stanislavsky method. She also trained in stage combat, musical theatre dance, acting for film, and devised theatre. She spent a semester studying Kabuki theater culminating in a performance of The Monkey King. While attending the university she performed in Shakespeare, student written productions and everything in between. Behind the scenes she focused mostly on costumes, completing several practicums and an independent study in costume research and design.
Since graduating in 2013, Britany has been teaching Prekindergarten. She moved to Minnesota from Kentucky in August 2016. When not performing or teaching Britany can be found biking or playing with her dog.  She is very excited to be a part of the staff here at Front Porch. She sees this as an opportunity to bring together her two passions, education and theatre. She could not be more ecstatic to be here at FPMT and share her love for theatre with her students.
﻿Back to Meet the Team.﻿