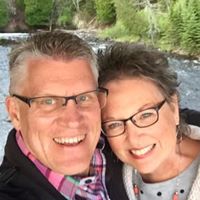 Front Porch Musical Theatre was started by Tim and Linda Lindeen in 2011, fulfilling their personal dream of providing family-friendly theatre with high moral, Christian standards to all families. Initially running rehearsals in their home, the name came about as students entered their front porch for classes! The theatre school quickly outgrew the space and now FPMT has its own spacious, beautiful almost 5,000 sq ft rehearsal Studios in Rogers!  FPMT performs productions at the beautiful Rogers Performing Arts Center. They also have 4 summer weeks filled with exciting theatre camps.

Linda taught music and theatre in the school system in both public and private settings for many years. Tim was a college theatre major and actor who always loved visiting her classroom and helping direct the drama in her shows. After Linda took a break from classroom teaching, and the couple moved to the NW suburbs, it soon became clear that many home-educated families, including the Lindeen's own grandchildren, were looking for a local opportunity for family-centered theatre classes. Linda and Tim started again to direct children's theatre with just 18 students. Word of mouth has grown their theatre school since then, with now close to 400 enrolled students each semester coming from public, private and home-based schools and employs many experienced, excellent staff members. Students come from many cities and towns to take classes with FPMT.  "A lifelong dream can come true!" say the Lindeen's!

They give all the glory to their Lord and Savior, Jesus Christ. Their students have often heard them give thanks to the Father who gives all good gifts...and the talents used in musical theatre are truly "good gifts!"
Return to Home
​Front Porch Musical Theatre
Call us at 763-260-4053.
Email us at frontporchmusicaltheatre@gmail.com.
FPMT Rehearsal Studios: 14180 Northdale Blvd, Rogers, MN 55374